One of the most common diseases that play a leading role in the death of women is breast cancer. The early and precise diagnosis of breast cancer plays a pivotal role to improve the prognosis of patients with this disease. According to many studies and extensive researches, such abnormalities can be detected and treated at primary stages of the disease making sure that highly accurate and precise techniques and soft-wares are used. Over the past 20 years, many applications have been found in the medical profession for thermal imaging such as mammography which is often used for breast cancer diagnosis. However, the potential side effects of using mammography and the rate of false positives discourages patients and physicians to use this method. In this article we focus on diagnosing breast cancer using medical imaging techniques through state-of-the-art artificial deep neural network approaches.

As we know, the sooner the anomaly is found, and the sooner treatment is consequently begun, and the better the chances of success. Moreover, it is important to highlight that the image processing has a powerful NIRF light signal, so that the image taken contains a lot of information that is very close to the actual state of the breast. Through the review of the articles, we found out the importance of image processing, which is currently performed well by a human being but which is not yet adequate when performed by artificial intelligence methods. This highlights the need for a Computer Assist Device (CAD) that will help us to better understand the thermal images captured by our different thermal imaging cameras. In this context a CAD will be a deep neural network with an SVM model as a classifier, as shown in Figure 10 (assuming it is already trained) that will take the thermal images in, and as output classify the images as containing cancer or not. We should clarify that the deep learning module will output the probability of a breast’s thermal image being classified as sick (having cancer) or healthy (without cancer). 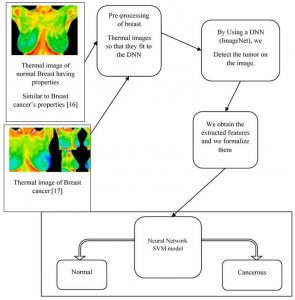 Figure 10. Illustration of our model

Why using a new model?

In section 2, we outlined previous and new techniques used for the detection and prevention of breast cancer. The model that we present in this paper takes advantage of two main factors:

Reviewing the article, it is obvious that work in the area of breast cancer detection from a computer scientist point of view could be a valuable contribution to the field. With this in mind, we presented the techniques most commonly used to detect breast cancer, and their strengths and weaknesses. One technique in particular appeared to have a promising future, because of its non-immersive property and the significant amount of data that needs to be processed with more efficient techniques. Infrared imaging coupled with an agent previously administered to a patient can lead to a very accurate tumor detector.

Published: January 3, 2021 Author: content Category: AI Clinical, Artificial Intelligence, CAD, deep learning, deep neural network, Thermography
Previous: FDA: Thermography is no substitute for Mammography!
Next: Machine learning and infrared thermal imaging in breast cancer detection
We use cookies on our website to give you the most relevant experience by remembering your preferences and repeat visits. By clicking “Accept”, you consent to the use of ALL the cookies.
Cookie settingsACCEPT
Manage consent